What if: Payson M. 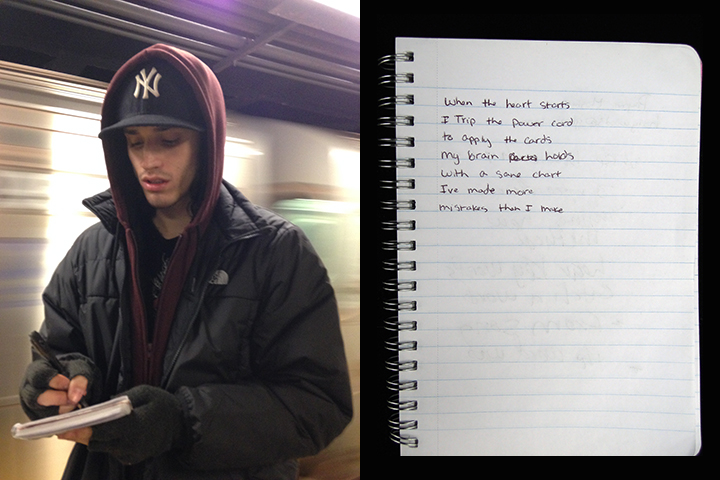 F train, Kings Highway to Jay Street, January 5th, 2016
He had a big blank lined notebook and he was getting ready to write. I wanted to ask him then and there, but he was so obviously pregnant with words that I felt it would be a disrespectful interruption. A few stations later I looked over the heads of my neighbors. He had written something on the left page. It looked like poetry. Finally he put the notebook away. By then I had lost my mojo. I picked up my book: Why Women Think Too Much. It said that women can tend to not ask for what they want, that one negative thought can lead to many. I reminded myself that interacting with strangers makes me happy. I got up, leaned over and asked him. I have seen this many times before – the transformation in the stranger’s face. When Payson realized what I was asking, he put on a thousand watt smile. That is the moment of connection. I cannot even describe what it is, but it is something very human and very special.

Payson writes hip hop. I asked about the notebook. He was listening to music, trying to catch a word that would inspire him to write. He wrote two poems. He wrote the one below on his subway ride trip home. The second poem is the one he wrote on the train with me. Here’s what he wrote in his Email:
“Talking to you got me thinking “What If” a lot. What if I decided to just bump to my music? What if I decided to read one of my books. You might’ve still came up to me, but you also might not have. As well as, what if I could’ve written something a little better?
I gave you a short piece, initially, on the heart working and the brain not having time to think or analyze. And that’s what happened to me as I went to write. My heart started pacing and brain shut down. It was personal. As is this. I thought a lot of what ifs because of you, so I want to thank you. There’s isn’t a better thing for a mind than questioning.”

I can see it
in their eyes
What if he ain’t a rocket ship
Just a rock thrown towards the sky
What if he’s on his way home
On a red eye
Decided he had enough of barely surviving
Came back to hide in a life
That he ain’t even alive in.
What if I didn’t make it clear enough
That I will never stop tryin
The only way you’re gettin my body back is if I die and they flying
Me back to Arizona to dry in
A place too dry to cry in
The open space I spent my childhood in
The wild drunk man-piling desert they dumpin life’s in
What if I made a trip with one chance
And it was Madeline handing me the notepad
Saying write fast
Two stops
To write something to stop
A fools past
A pattern of nothing
Good luck.
I came up
Short and panicked at my work

What if I’m scared
But I’m too scared to show it
Missing opportunities like she my bitch
Ignoring the phone cause she don’t condone it
My life ain’t tagged but that’s it
Once I’m finished
All this digging
All this building
On the edge of a thirty story, feelin
if I’m slipping what was the point in breathin
What if I was practing swimming so I could drown in the deep end

What if I adapt and I keep on living

Read a poem by Gabrielle V.