What if: Payson M. Surrender to Suffer: Alejandro C. 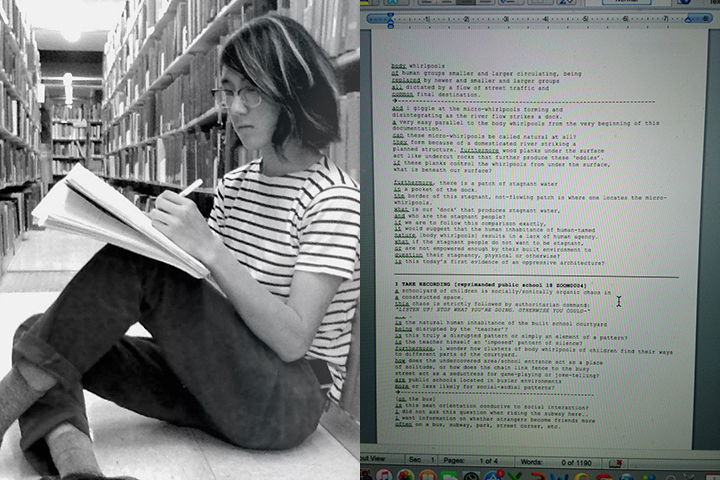 1 train, bus, street, September 2014
It was the first day of class. Seb was a stranger. This was a new project. I would ask the students to write a poem. Why not cater to their terrific writing skills? In my early teaching years I saw writing as a distraction, as something that would keep “big-brain” students from making something visible and physical. Now I would turn my architectural design studio on its head, do everything the “wrong” way (which of course is the right way). For a few weeks I was assigning poetry in all of my classes.

I came to learn that Seb was freakily bright and talented (how lucky for me!). He had coding skills, music skills, sound interests, design and verbal skills, and a host of other creative abilities. He was socially engaged as well. A picture of him surfaced at a rally. That spring he began an internship at Rikers Island, teaching prisoners Hip Hop Music Production. Last summer he was in Iceland. He waited tables and travelled. Now he’s on his way to study in Russia.

I asked my class to take a journey by subway, bus and foot, to a place they don’t usually go, and to write about space. Part two would ask them to turn the poem into a three-dimensional model using unorthodox modeling materials, like bread and eggplants. Here is Seb’s journey:

body whirlpools
of human groups smaller and larger circulating, being
replaced by newer and smaller and larger groups
all dictated by a flow of street traffic and
common final destination.
→————————————————————————
and i giggle at the micro-whirlpools forming and
disintegrating as the river flow strikes a dock.
a very easy parallel to the body whirlpools from the very beginning of this documentation.
can these micro-whirlpools be called natural at all?
they form because of a domesticated river striking a
planned structure. furthermore wood planks under the surface
act like undercut rocks that further produce these ‘eddies’.
if these planks control the whirlpools from under the surface,
what is beneath our surface?

furthermore, there is a patch of stagnant water
in a pocket of the dock.
the border of this stagnant, not-flowing patch is where one locates the micro-whirlpools.
what is our ‘dock’ that produces stagnant water,
and who are the stagnant people?
if we are to follow this comparison exactly,
it would suggest that the human inhabitance of human-tamed
nature [body whirlpools] results in a lack of human agency.
what if the stagnant people do not want to be stagnant,
or are not empowered enough by their built environment to
question their stagnancy, physical or otherwise?
is this today’s first evidence of an oppressive architecture?

I TAKE RECORDING [reprimanded public school 18 ZOOM0004]
a schoolyard of children is socially/sonically organic chaos in
a constructed space.
this chaos is strictly followed by authoritarian command:
“LISTEN UP! STOP WHAT YOU’RE DOING. OTHERWISE YOU COULD-“
. . .
is the natural human inhabitance of the built school courtyard
being disrupted by the ‘teacher’?
is this truly a disrupted pattern or simply an element of a pattern?
is the teacher himself an ‘imposed’ pattern of silence?
furthermore, i wonder how clusters of body whirlpools of children find their ways to different parts of the courtyard.
how does the undercovered area/school entrance act as a place
of solitude, or how does the chain link fence to the busy
street act as a seductress for game-playing or joke-telling?
are public schools located in busier environments
more or less likely for social-audial patterns?
→———————————————————
[on the bus]
is this seat orientation conducive to social interaction?
i did not ask this question when riding the subway here..
i want information on whether strangers become friends more
often on a bus, subway, park, street corner, etc.

traveling south and looking out the window,
i dread. i fear that every building’s façade masks
a massive hollow courtyard.
this disturbs me not because i do not see the utility of such
a mirage,
but because i feel like the environment is
hiding something from me.
do i believe that knowledge of space should be openly public?
is this why i am disturbed?
information on public vs. private space might help me decide.

ideas of narcissism, voyeurism, and the oppositional gaze
flood me
as i move my eyes from the window to the
fisheye-like, wide-angle mirror
that the bus driver uses to keep his eye on us.
both the mirror and the expansive windows are dirty.
in midtown, does the glass-mirror barrage of macro-façade
amplify these feelings in passerby?

my focus returns always to sonic hyperawareness.
what properties of this stone wall result in this crowded
vocal
reverberation that provides the back-up vocals to my
step-rhythm?
the angle of my gait and my height,
are these the only proponents of an intimate psychoacoustic?
how does the bend of my scoliosis
angle my ear to the louder side of the street?
what orients me?
i conclude that what i hear completely dictates what i see
and sense in this area of the city,
and wonder if it could work moreso the other way around.
it only makes sense that i should be critical
of the pre-conditions of my psychoacoustic.
→———————————————————————–
i approach bridge overlooking the harlem river.
here are patterns, and a very obvious confrontation of built and natural environment.
an almost comically tamed nature.
patches of glitter seduce –
does the angle of the sun and surface of the water
produce a light-glint rhythm more or less predictable
than the sonic perception as a result of body’s orientation
to street noise or to the sinusoidal-undulating subway car from earlier?
certainly more immediately pleasing ha ha

INTERPOLATED, STACKED OR INTERSECTED?
kinetic tryst. [contract]
****outside the subway car window, the car in front
****undulates in a sinusoidal frequency,

i become red blood cell in artery again
and visualize the veinous come-uppance of
vibration – –
from assaulted track to
trembling feet and wrist.
vibration is curious,
bridging the gap between castrated observer
and cold installed object [city].
this intimate touching of each other,
a kinetic tryst.
the construction of these steel tracks results
in the repeated high-frequency disturbance of my body.
like i am in the electric chair.
but instead of death, i am rewarded with evidence of a
great human accomplishment – the circulatory system that
is carrying me up town.

i imagine the ‘current’ of vibration that continues to
use me as a ground, and speaking of branch-like circuits,
the circulatory system has now surfaced.
under-surface again

I TAKE RECORDING [ZOOM0002/3]
****outside the subway car window, the car in front
****undulates in a sinusoidal frequency,

the stop-start train pattern
and its human reply: the “stagger”, please me
as the following examples of the ventriloquistic nature of pattern surely will as well.

i come across what is almost the exact opposite of the
school courtyard’s organic chaos as i walk by
a construction area.
I TAKE RECORDING [ZOOM 0006/7]
my brain hurts
overwhelmed with ideas of an already built environment
being deconstructed
in order for a new built environment to
be constructed.
these actions being done by humans for later human inhabitance
and interaction.
patterns then are not just phenomena to be observed
within the environment,
but the environment itself is
a spatial-temporal pattern of de/re-construction.
is this ‘section’ of manhattan being patterned into a New vision, or iterating through decades of deterioration/use?

i look inward and focus on my biorhythmics.
my heavy steps and heavy breathing create a symphony
with the sonic patterns of tree breeze, birds, a cicada,
distant sirens and airplanes
[an out-of-place and potentially invasive sonic element].
was this park meant to be an immersive escape from city, and do these intentions matter? i now think back to the construction site, and whether space planners (when working to transform a section of the city) take sound into account, and whether sound is a significant enough life-element to be kept conscious when building an environment for human inhabitancy.
[of course it is]

we passengers mold to the bus
using many contact points, seat, hand, pole
for stability – an interaction i should have realized on the subway when thinking about vibration transfer.

crosswalk body flow vs. street car-bike flow
is this relationship INTERPOLATED, STACKED OR INTERSECTED?
if one travel mode is privileged over another,
i consider whether the priviliging is macro or micro-temporal,
(micro being pedestrians privileged at night, etc)
or absolute.
(cars are always the most priviliged)

Read a poem by Payson M.