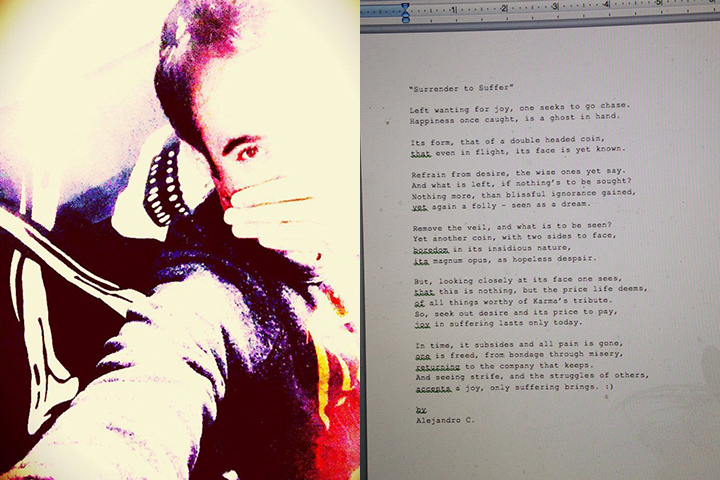 Somewhere, January 16, 2016
My military students are some of the deepest and most interesting humans I know. They are bright, intense, full of surprises, funny and, in a way, unknowable. They have lives that we cannot fully understand, lives of the mind, and physical ones too.

One such student, Alejandro, is overseas now doing important and dangerous work. He is in an elite group, on a mission we cannot understand or know about. In this way he is a stranger to me, despite the fact that I know him well.

We have been corresponding via Facebook. He came to say goodbye while I was teaching. I found that very moving. He wrote to me about the suffering he is seeing. I felt what he was saying but I couldn’t picture it. I asked him to write a poem. He said he’d think about it. A few chats later I received this. I find it moving and beautiful, considering what he is doing day to day, and considering that he wrote this from a form of “prison”—a protected base somewhere on the other side of the planet.

This is his first poem. I asked him if it was “risky,” if he would become know as “the creative writer, in addition to “the artist, nut, humorist and crazy man” (I’m quoting myself, imagining his colleagues). He said, “The risk is mine to enjoy, the reward others can take.” Yes, a reward Alejandro! Thank you from the other side of the world.

Left wanting for joy, one seeks to go chase.
Happiness once caught, is a ghost in hand.

Its form, that of a double headed coin,
that even in flight, its face is yet known.

Refrain from desire, the wise ones yet say.
And what is left, if nothing’s to be sought?
Nothing more, than blissful ignorance gained,
yet again a folly – seen as a dream.

Remove the veil, and what is to be seen?
Yet another coin, with two sides to face,
boredom in its insidious nature,
its magnum opus, as hopeless despair.

But, looking closely at its face one sees,
that this is nothing, but the price life deems,
of all things worthy of Karma’s tribute.
So, seek out desire and its price to pay,
joy in suffering lasts only today.

In time, it subsides and all pain is gone,
one is freed, from bondage through misery,
returning to the company that keeps.
And seeing strife, and the struggles of others,
accepts a joy, only suffering brings. 🙂

Read a poem by Sebastian C.