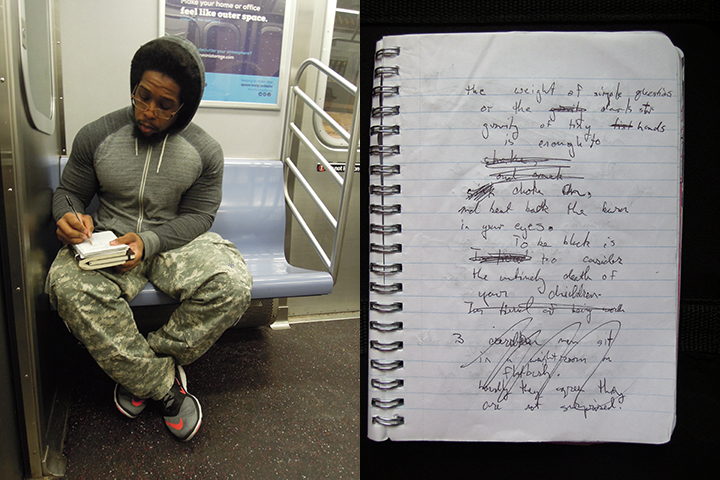 Q Train, Dekalb Ave. Station to Midtown Manhattan and back, March 24th, 2016
My favorite poet of the project: I met Shapel in 2014 deep inside Brooklyn on a 12 degree January night. I was waiting for a flex dance troupe – Special Ops – to show up at the Church Avenue Station to ride with them and make a movie. They were late. Very late. I asked Shapel to write a poem. He blew me away with these lines about the subway:
It is alive in
more ways than
metaphors of flesh.
Steel arc
the narrative of
people,
humming wealth and
poverty on the
tracks in between.
Last week I asked him to ride with me again, to write a political poem, since The Monkey Cage (listen here) on WKCR had asked Poems by New Yorkers to participate. Shapel and I had no destination. We just rode the Q and wrote. He worked hard. There are pages of crossed out words and new choices. He would look up to the ceiling for seconds at a time, then write again. It turns out Shapel grew up writing on the train. When we turned around in Manhattan he said, “I’m not sure where this is going.” At the end he said, “It didn’t go where I had expected.” But boy did it go. I am in awe of this brilliant young man. He is looking at the world from a POV once-removed and also from the inside. Shapel writes daily and he works as a trainer (hence his bulked up appearance since 2014). He is working on a novel. Right now he just writes. He’s been waiting on submitting his work, simply because you either do the work or you promote it. I consider myself so lucky to have been stuck at Church Avenue that bitter night. Imagine the voices out there!

the weight of simple questions
or the dark star
gravity of tiny hands
is enough to
choke on,
and beat back the burn
in your eyes.
To be black is
to consider
the untimely death of
your children.

There is no language for
why a life matters.
It’s logic is
warmth,
The way one hand can
curl and leaf blindly around another
a brown finger
stuck in a bramble of hair,
eyes,
laughter, squeezing the ribs,
Hurt so thick it
makes the day slow and
heavy and wordless.

What does it cost me
to explain my life to you?
To find acquittal
For my breathing?
To plead for water?
To question the nature
of my love, and pain
and hope to better
answer your own?

What should it cost
when we pay in children?
In years?

choke on, and beat,
back the burn in your eyes
and sometimes find
yourself silent
and shaking.

Read a poem by Adam E.