Pushing Himself Between the Bodies: Danaya E. 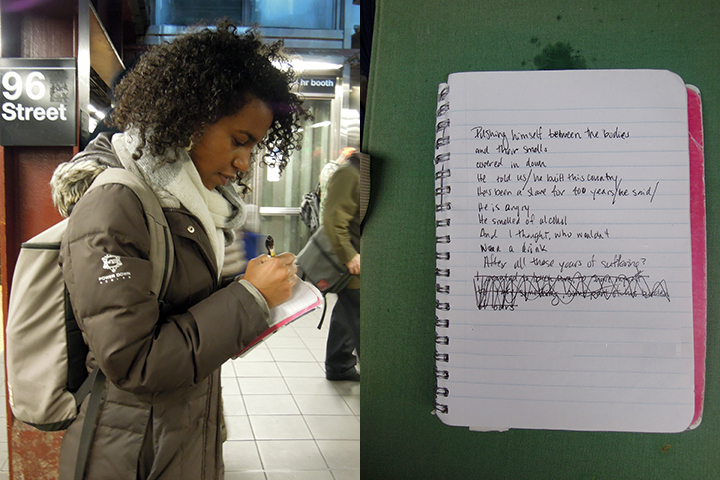 96th Street Station, November 28th, 2016
I first saw her at 116th Street. My poem meter peaked, but she was texting and I sensed I could be very wrong. I didn’t feel like getting rejected. I waited and watched students walk down the stairs to the platform. Each new stranger did a double take. I think that’s because most people on the platform don’t look each other in the eye. When I am hunting for a stranger, my body language stands out. We boarded the express train together and she smiled at me. I had trouble getting up the guts. I was in a very interior place, thinking about attachment. That is the best time to connect to a stranger. I walked up to her and she said “Sure.” As it so often the case, it was a warm and interesting interaction. She is a professional actor, now the understudy for a major role in NYC. She had been interviewing for an important new position and I had been there and done that and offered a few thoughts. She asked if she could hug me goodbye. Yes of course. Hug a stranger! I do believe that this may be the antidote to the alienation and hatred floating around the country these days. Humans can be hateful and mean. They can also be kind and generous to people they don’t know. It is a wonder.

Pushing himself between the bodies
and their smells
covered in down
He told us
he built this country
He’s been a slave for 400 years
he said
He is angry
He smelled of alcohol
And I thought, who wouldn’t
Need a drink
After all those years of suffering?

Read a poem by an unknown rider