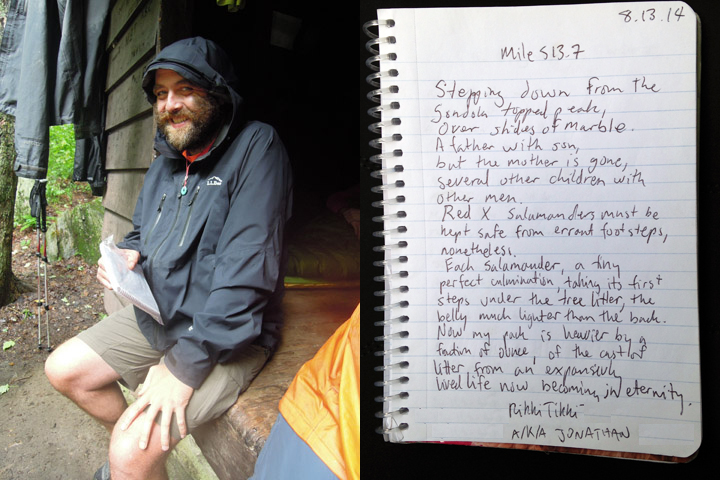 Poems by New Yorkers posting on holiday from the Long Trail / Appalachian in Vermont, Greenwall Shelter, August 12th, 2014
He was one of the thru-hikers taking a zero on a rainy day at Greenwall Shelter. I told the sluggish hikers about the poetry project. He came to my tent and said, “I am a Massachusetts attorney. I am carrying human remains.” (He just send me an note. In New Jersey. Intends to bring the remains to the finish line – Georgia)

Stepping down from the
gondola topped peak,
over slides of marble.
A father with son,
but the mother is gone,
several other children with
other men.
Red X Salamanders must be
kept safe from errant footsteps,
nonetheless.
Each Salamander, a tiny
perfect culmination, taking its first
steps under the tree litter, the
belly much lighter than the back.
Now my pack is heavier by a
fraction of ounce, of the cast off
litter from an expansively
lived life now becoming in eternity.

Read a poem by Matt I.