If I Sit In My Head Awhile: Kurt K. 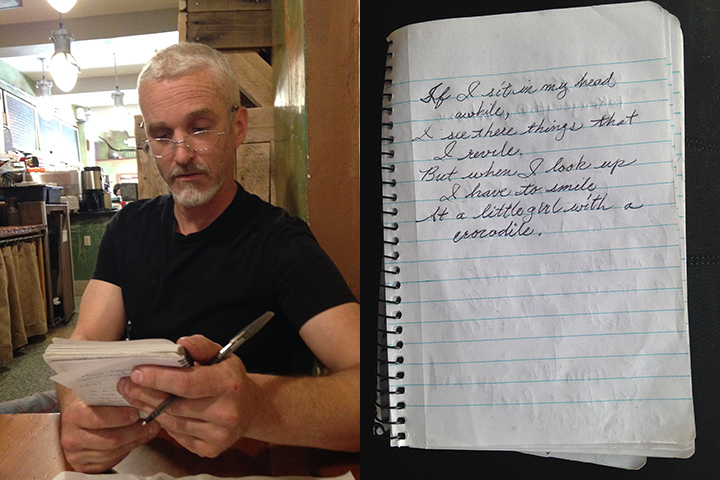 Fuel Cafe, July 12th, 2015
Two men at a table are discussing Sanskrit (sounds like the start of a joke). Poets? I asked my writer friend Mickey about the one who was tutoring the other. “Ask him, he’s a poet.” The yes quickly turned into a no. There was too little time; he had to leave. He said he’d try again another day. This usually means: never. A Sanskrit scholar had escaped my clutches; I was disappointed. Mickey and I determined that when someone is very focused on a scholarly subject, it becomes difficult to be put on the spot – to be spontaneous and creative. A few hours later he came back. He had composed this in the car. I had written him off, and here he was, hand-delivering a gem.

The poem refers to a print hanging near his table at Fuel. He had been discussing Jeb Bush and the Koch brothers. He’s a furniture maker, “amateur Sanskrit scholar” and poet.

If I sit in my head
awhile,
I see there things that
I revile.
But when I look up
I have to smile
At a little girl with a
crocodile.

Read a poem by Howard