Ride With Us and Feel the Vibe: Damani D. 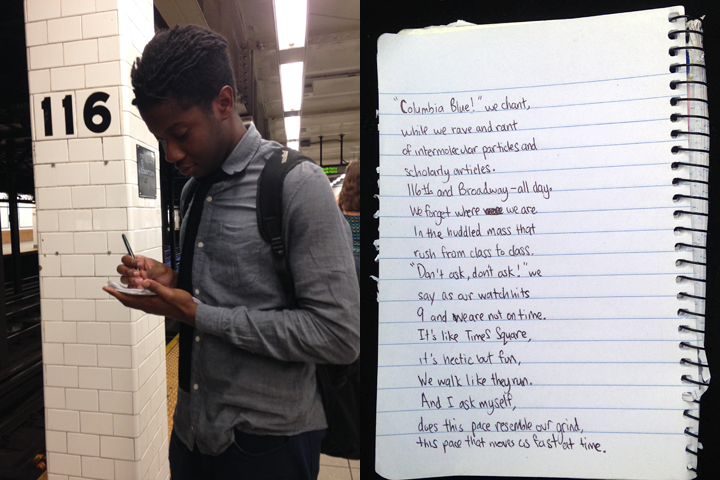 Posting from the subway then back to Fuel:
1 train, 116th Street Station to 96th Street, July 10th, 2014
I had just come from a Columbia conference called the Power of Conversation. A half a glass of wine and my antenna was sharp. The first person I saw on the platform was Damani. A writer; it was obvious. I received this once above ground: “I honestly felt like I rushed that poem…that was a fateful encounter and you deserve something more true to what I was thinking about at the time you approached me.” Nothing better than a stranger inspired to do two for one. I’ve posted both in reverse chronology. Which do you prefer?
He’s an undergraduate, a super personable native New Yorker – Queens, and a clever writer.

I told him,
“Ride with us and feel the vibe.
Let the car window slide.
You might look more alive.”
To which he replied, “I wanna get high.”
“High off what?”
“High off the pipe.”
I said, “Uh huh but you gotta start getting high off life.”
He spit with spite, his fists clenched tight.
“Aight, aight. You say that every night. Try it like once or twice,
then tell me how you feel.”
With a huge, heavy sigh, I took my foot off the pedal and my hands off
the wheel.”
“Chill, son. Chill. Weed illuminates the real.”
“I don’t need it. I don’t need it. I don’t need it – what’s the deal?
The might of my mind will persuade me how to feel.”

“Columbia Blue!” we chant,
while we rave and rant
of intermolecular particles and
scholarly articles.
116th and Broadway – all day.
We forget where we are
In the huddled mass that
rush from class to class.
“Dont ask, don’t ask!” we
say as our watch hits
9 and we are not on time.
It’s like Times Square,
it’s hectic but fun.
We walk like they run.
And I ask myself,
does this pace resemble our grind,
this pace the moves us fast at time.

Read a poem by Mickey F.