We Hustle and Bustle: Dottie T. My Day Was a Little Bit Happy: Kelsey S. 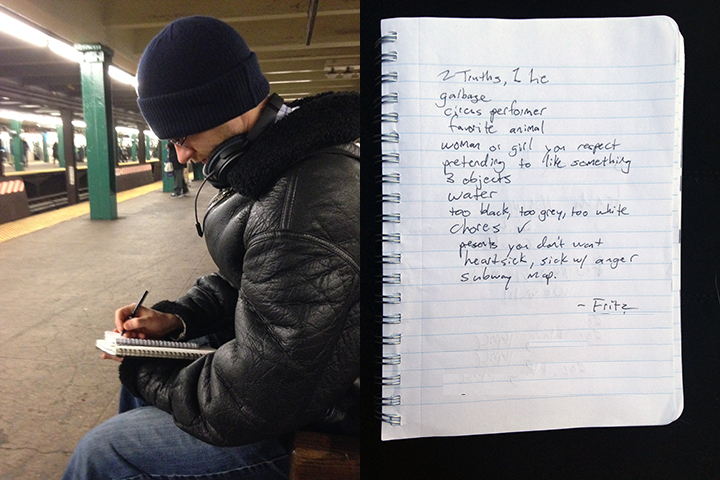 A train, West 4th Street to High Street Station, February 11, 2016
Fritz had six or seven words in list form. He was wearing headphones and sitting on the station bench. I pause when I see this. If it’s a to do list, he’s not a sure bet for a poet. If it’s a poem, he’s not a sure bet either. His words were “prompts” and he was very receptive. Turns out he was on his way to teach writing to formerly homeless women, through the New York Writers Coalition. He’a a sociologist and history teacher at a local Manhattan college. Here is his blog.

I continue to love this project for the poetry and interaction with stranger New Yorkers. I also love it for the glimpses I get into the human psyche, psychological make up, mood, upbringing and faith. I mentioned to Fritz that some men who are writers have trouble saying yes. He said that if he had any hope of succeeding with his “prompts,” then he had better be able to respond to a prompt himself. Now I’m curious about the prompts. Which one worked best? Which would you pick?

Read a poem by Dottie T.