The Arborist Trust is What We All Seek From Man: Wendy W.

The Power of Conversation 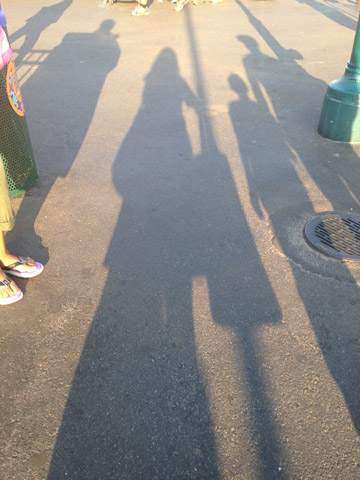 Jerry had a napkin stuck to his elbow
during his sum-up speech.
The woman who blogs about
conversational intelligence –
no, nothing like love intelligence –
spoke of the “not like me” button in the brain
and how it can switch to “like me” –
as in we are alike –
if you say the right thing.
She came up to me at the break and said,
“I know why you are successful.
People can tell you are for real in .07 seconds.”
I told her about the forehead door,
read her that poem. She said,
“He wrote that on the train right in front of you?
“Yes.” I read her Benjamin S’ too. It ends:
“One word can open up a world among the
millions passing over-head.”
She said, “I open the next session.
Can I quote that instead?”

My neighbor Bob Wertheimer, whom I mistook for a NPR reporter
was a lawyer.
He took elegant notes.
When I said, “You should write me a poem,”
He said, “I already did.”
Imagine, we had not shared a word
but something neighborly and unspoken
passed between us.
He let me see it at the end.
It was about people “leaving.”
“She will leave me…”
Who? What?
Then he left me with no poem.
“No you cannot have it.
I never share my writing.”

I tried to make a connection with the other Cohn in the room
but she said,
“I’m married to a Cohn,” as though the name
had never been good enough.
Well but her maiden name was Grosser.
One woman took a moment to announce
that she was going to look the forty of us in the eye.
She proceeded to do so –
I think I rolled mine –
Then she said, “I believe
that there hasn’t been one real conversation here today.”
She was right. It is the flaw of a conference.

Phil was cool.
He teaches political science at Potsdam.
We were both leery of group activities –
we confessed that at the break.
Upon returning, the maven of corporate conversation
asked us to turn to our neighbor, hold hands, look him or her
in the eye and say, “I am curious about…”
I was in a three way with Bob and Liz.
I don’t know why I did it:
I looked deeply into moderator Liz’s eyes
and said, “I’m curious what your relationship is
to the other moderator?”
Well he had put his hand on her back
and the notes were flying back and forth-
elementary school style.
I knew that it was indiscrete.
I can be a bit of a provocateur,
especially when public events need spicing up
or when faculty meets are talking bullshit.
She did not answer
Later though, during the wine session,
I apologized. She said, “I had wanted to answer,
maybe you already guessed?
Lover, I thought.
He is my Dad.”

There was much talk about happiness.
Lionel, the man who runs
the New York Happiness Club,
said he has been happy since December 1994
Does he really know what happiness is?
He described it, upon inquiry from another,
as “a feeling of inner well being.”
It is more complex than that,
I thought, and how can he remember that date?
Then, being happy myself
with feelings of inner well being
except when I let in mother-connected doubts
I remembered my narrative
casting back from Oetzi into the future,
to feelings of being alive
and I believed Lionel
and the Socrates Salon, and the Death Café,
and the Happiness Clubs and the NCDD (Dialogue and Deliberation).
The corporate lady who loved that poem
said that connection (“like me”) comes from asking questions
for which we do not yet have answers,
that it primes us to trust.
And so began my Happiness Cafe
with a question
so important but I did not know it at the time,
cast through the Internet
on servers sublime
Tumbled into subway
spawning poems that rhyme.