Cheekbones like crowbars: Matthew VW Art is a Message From the Future: William M.

This Has Nothing to do With the World: Daniel M. 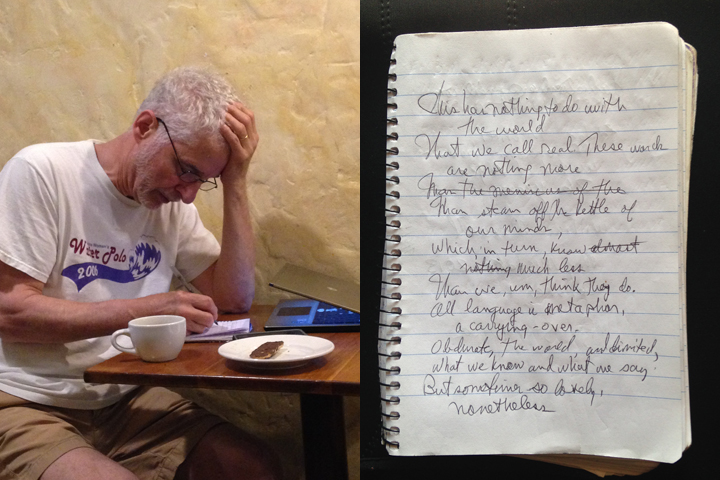 Poems by New Yorkers posting from Fuel Cafe in the Berkshires, July 6th, 2014
“Hello, hello!” He was fumbling with his cell. I told him the service was lousy. He went outside and when he returned he said, “I’m sorry” in a way that struck me. It was an opportunity for a poem. I took him for a typical second-homer, perhaps coming from a game of tennis. Yes typical in a way, and exceptional. He was the former Editor-in-Chief of Random House, former fiction editor at The New Yorker, and the author of the 2013 book My Mistake. I nearly plotzed. What a nice man. He encouraged me to ask his son. First father/son posting. See next post.

This has nothing to do with
the world
That we call real. These words
are nothing more
Than steam off the kettle of
my mind,
which, in turn, knows
much less
Than it, um, thinks it does.
All language is metaphor,
a carrying-over.
Obdurate, the world, and so limited,
what we know and what we say
But sometimes so lovely,
nonetheless

Read a poem by Matthew VW

Tagged with → Daniel M. • Daniel Menaker • language • lovely • metaphor • My Mistake • New Yorker • Random House • This has Nothing to do with the world • words • world