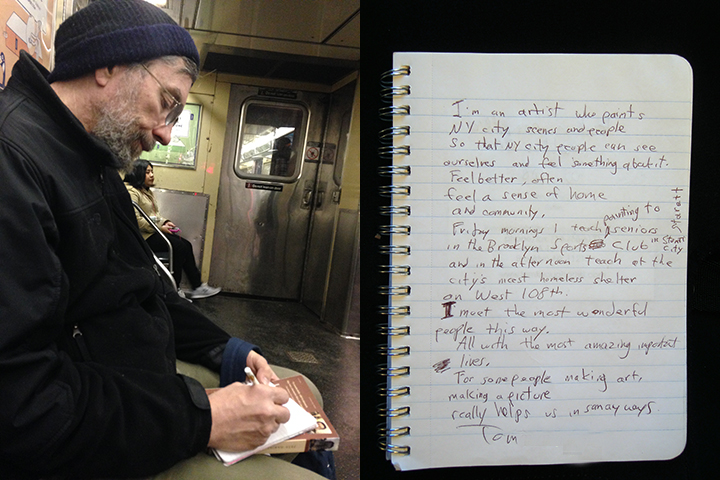 C Train, High Street Station to 79th Street, February 21st, 2016
I was traveling to Manhattan with my girls. It makes them slightly uncomfortable and slightly delighted when I talk to strangers. Tom walked in and my poet meter went into the red. I had to ask. It turns out his wife is a poet, but he was unsure about the form. Maybe I was picking up on the family poetry vibe? No. It was his vibe. I asked. He put down his book. He was curious, open-minded and happy to engage in conversation. I told him about the Scofflaw Agent who wrote about his daily dealings with impounded cars. He determined that he would give it a try. This was the second poet in a row who was on his way to teach homeless or formerly homeless individuals. People in New York City are doing things for others. This is refreshing in these mean times, when hateful words are filling up the media. Real New Yorkers are performing acts of kindness. Each of us is capable of turning things around. Tom is an inspiration. Take a look at his paintings here.

I’m an artist who paints
NY city scenes and people
so that NY city people can see
ourselves and feel something about it.
Feel better, often
feel a sense of home
and community.
Friday mornings I teach painting to seniors
in the Brooklyn Sports Club in Starett City
and in the afternoon teach at the
city’s nicest homeless shelter
on West 108th.
I meet the most wonderful
people this way.
All with the most amazing important
lives.
For some people making art,
making a picture
really helps us in so many ways.

Read a poem by Kelsey S.