Film Reels Burn Faster Than You’d Believe, Ben R.  I am a Ghost of Everything I Knew, Rob G. 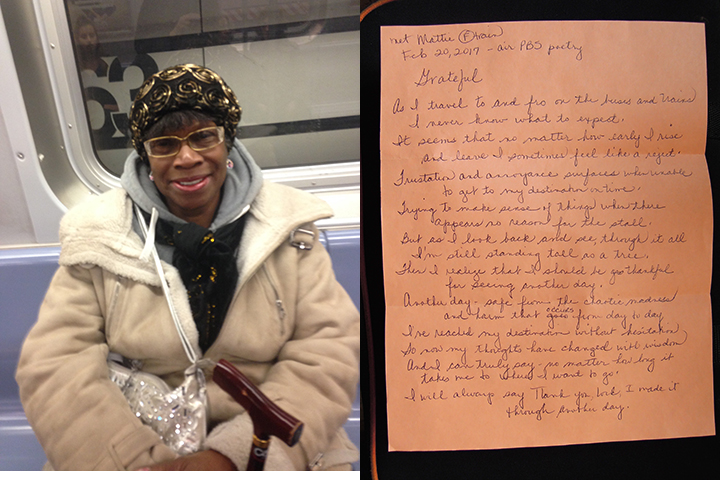 F train, February 20th, 2017
I call some women on the train “New York City royalty.” They have lived here their whole life. They are wise. Elegant. They embody New York. They make you feel good. They teach you something. Jackie is one of these women. She sat next to me and we commiserated over the stalled train. She offered reassurances that I wished were coming from within me – stuff like “Lord give me…” and words that meant “have patience.” I asked her to write a poem. She said she’d have to do it later, that I could call her. I reached her on the third call. We spoke for thirty-nine minutes. She read me the poem she had written (and later mailed it to me). We spoke about her life, her work in public administration and customer service, her children, her son (so brutal – he was murdered in 2001 in Manhattan, age 39. “I dealt with it, I didn’t accept it), and about her search for a part time job. She expressed feeling discarded. Here I was, a stranger, calling her out of the blue. “The Lord,” she said, “sent you to me.” And the F train. I asked Jackie how I could be like her and she said, “Have a song in your heart.”

As I travel to and fro on the buses and trains
I never know what to expect.
It seems that no matter how early I rise
and leave I sometimes feel like a reject.
Frustration and arrogance surfaces when unable
to get to my destination on time.
Trying to make sense of things when there
appears no reason for the stall.
But as I look back and see, through it all
I’m still standing tall as a tree.
Then I realize that I should be thankful
for seeing another day.
Another day – safe from the chaotic madness
and harm that occurs from day to day.
I’ve reached my destination without hesitation
So now my thoughts have changed with wisdom
And I can truly say – no matter how long it
takes me to where I want to go.
I will always say Thank you, Lord, I made it
through another day.

Read a poem by Ben R.