It Can’t All Come From Within: Robby R. 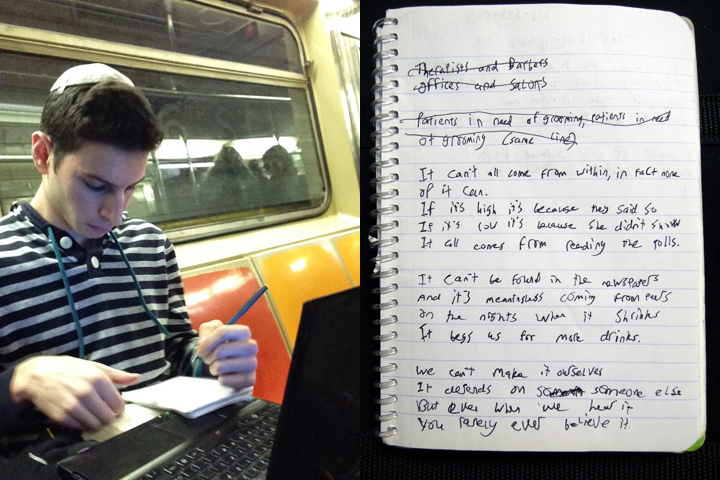 1 train, 116th Street to 66th Street, February 10th, 2014
A funny dialogue with Robby, a bright Yeshiva University student, including lots of discussion about offensive material, omissions, editing. What is the responsibility of the poet? Is there responsibility? We agreed to omit a line that seemed out of the blue and sensational. Good idea or bad? Read both of his poems, each with something omitted.

1.
It can’t all come from within, in fact none of it can.
If it’s high, it’s because they said so,
If it’s low, it’s ‘cause they didn’t show.
It all comes from, reading the polls.

It can’t be found in the newspapers
And it’s meaningless coming from peers.
On the nights when it shrinks
It begs us for more drinks.

We can’t make it ourselves
It depends on someone else
But even when you hear it,
You rarely ever believe it.

I heard of girls seduced by it,
So I figured I would try it.
They say it’s supposed to be the key,
But I never could find my door.

I think it’s attracted to the athletic
And magnetic to the pretty aesthetic
I know this is all pathetic
But at least I think I get it.

2.
So the truth is that I hate writing poetry
But these days all my thoughts keep asking
Like a little kid for lebrons headband
To be stanzafied, rhymed, vagueified…convoluted

This lady named Madeline asked if I could write
Her a poem on the subway, and she told me it was too conceived.
Go figure; so I told her I’d try again, but this time
I’m writing fresh, from the last train of the car.

Ya know, I’ve never ventured out here before
That single door, in the back, small window…what’s Cooler:
The sight of my face fading over the tracks, yet never disappearing?
Or the faces of the express train, within reach, fading over mine?

I think of the subway like an elevator, a long ass
Horizontal elevator that stops at every stop
For some reason b/w 145th and 191st the train stops four
But b/w 116th and 72nd the train stops 7

But that’s not my point, my point is, that the subway is a
Horizontal elevator. I find it pretty ironic
That the things which make distance no obstacle
Make hostile New Yorkers docile, and the distance between them palpable.

Read a poem by Jane G

Tagged with → athletic • It Can't All Come From Within • madeline • Poems by New Yorkers • polls • Robby R.