A/C train to Clark Street station, October 15th
She says it all below. Except for two things: she doesn’t mention her smile–a very pregnant, knowing, self-searching one. I aske, “Are you smiling because of our interaction (mine and her neighbor)?” “No.” “Would you like to write a poem…?” “Yes.” Radiating intelligence and introspection.

Bleary-eyed I spy a space
Excuse me
She moves
He sits unmoved. 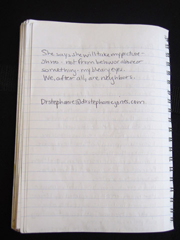 I’d rather be eating he writes.
Ah. Internally preoccupied.
Doesn’t seem paranoid, dangerous.
Beyond the times I scan for a see-
something say-something.
Seeing the usual suspects I return to
the workings of the outerworld.
Suddenly he moves reaches across me
I startle hypervigilant startle response
She takes the notebook
I invisible myself momentarily and then
Bear witness to a moment of connection
Between two writers
Him a creative-writing fiction major
Her having recently completed her 13-year-
long novel and about to get it to a high-
up connection and feels ready for nothing
but prefers something.
She asks if I want to write. I say sure.
She says she will take my picture-
Oh no – not from below or above or
something – my bleary eyes.
We, after all, are neighbors.

Read a poem by Andrew T.